Spannr » Articles » Analyzing One of Aging’s Biggest Dilemmas: The Lack of Government Funding

Analyzing One of Aging’s Biggest Dilemmas: The Lack of Government Funding 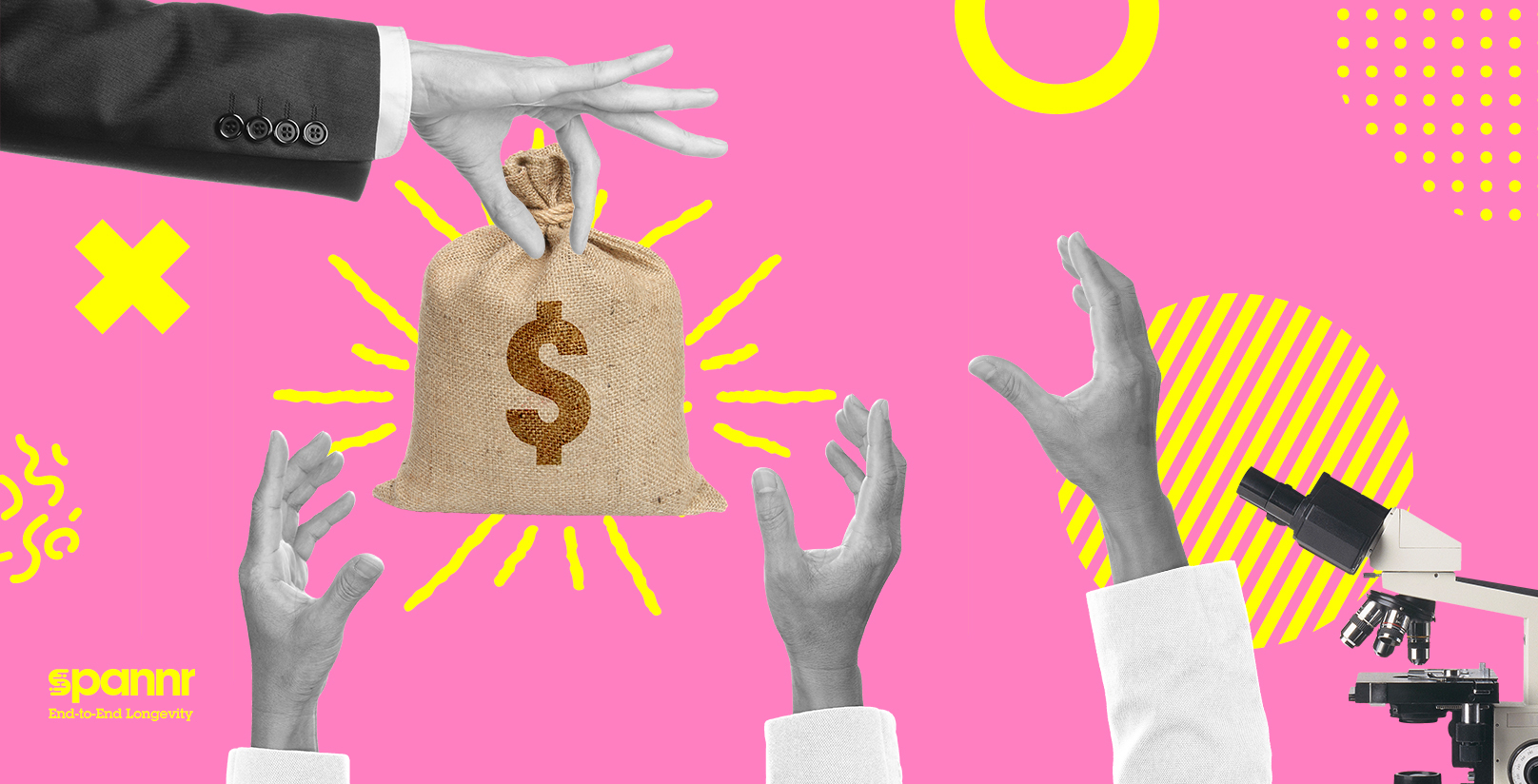 Each year, Congress must pass a budget to fund the government for the following year. This requirement has become fairly complex over the years. The decisions of both which federal programs should be funded and exactly how much each receives must be agreed on.

The entire affair, commonly known as the Federal Budget and Appropriations process, can have a significant impact on US education, child care, human services, urban development, healthcare, and programs of that nature.

More importantly for longevity enthusiasts, however, is that these budgets give us a chance to see how much funding the National Institute on Aging (NIA) – the largest government entity supporting geroscience, longevity, and research on age-related disease – receives annually.

With this information, not only do we get to see how much capital the NIA requests, but we also get the opportunity to make apple-to-apples comparisons with other government-funded health initiatives comprised under the National Institutes of Health (NIH).

This perhaps gives us a closer look at just how much importance the US government puts on aging and the breakthrough therapies scientists are developing to extend the lifespan of humans.

Yet the numbers we’re about to go over, on the other hand, might lead you to believe that the government actually cares very little.

But before we pass on too much judgment, let’s take a step back and look over how the NIA gets funded in the first place, the agency’s annual goals, and how much money it has received over the years.

Formed in 1974, the NIA “leads a broad scientific effort to understand the nature of aging and to extend the healthy, active years of life.” One caveat, which we’ll highlight in further detail below, is that the NIA is also designated as the primary Federal agency supporting and conducting research on Alzheimer’s disease.

The NIA itself is headquartered in Baltimore, Maryland, and represents one of the few government-funded agencies in the world that’s dedicated to funding aging research.

Over the years, the NIA has received a substantial and growing amount of funding through the NIH. To give you an idea of the amount of capital we’re talking about, here’s a chart depicting the NIA’s Appropriations (another word for a sum of money devoted to a special purpose) from 2016-2021. 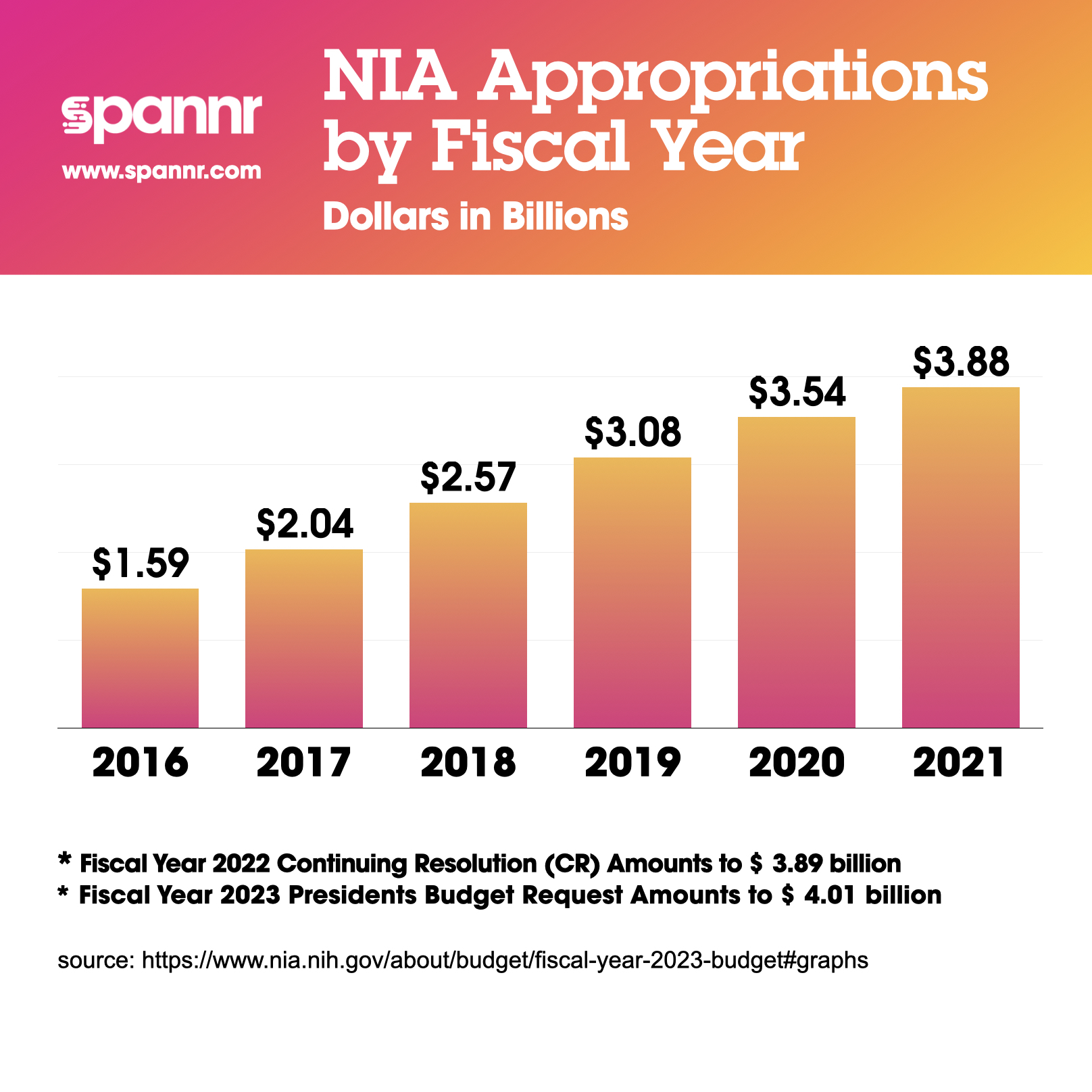 As you can see, the NIA has consistently increased appropriations year-over-year since 2016.

On March 28, 2022, President Biden submitted to Congress his Fiscal Year 2023 Budget request encompassing all Federal agencies. This included a proposed budget of approximately $62.5 billion for the NIH.

Of that $62.5 billion budget request, roughly $20 billion is set aside for initiatives outside of the various 27 ICs. As shown here on page 86, this includes ~$12 billion for the HHS Pandemic Preparedness Plan and ~$5 billion for the newly established Advanced Research Projects Agency for Health (ARPA-H), which was first proposed in the 2022 President’s Budget Request.

For the following exercise, however, we’re going to remove this additional ~$20 billion, and just focus on the ICs; this way, we can draw better comparisons from the long-established divisions of the NIH.

That said, here’s how the remainder of the $62.5 billion budget request is distributed amongst the ICs in 2023, according to the NIH’s Office of Budget: 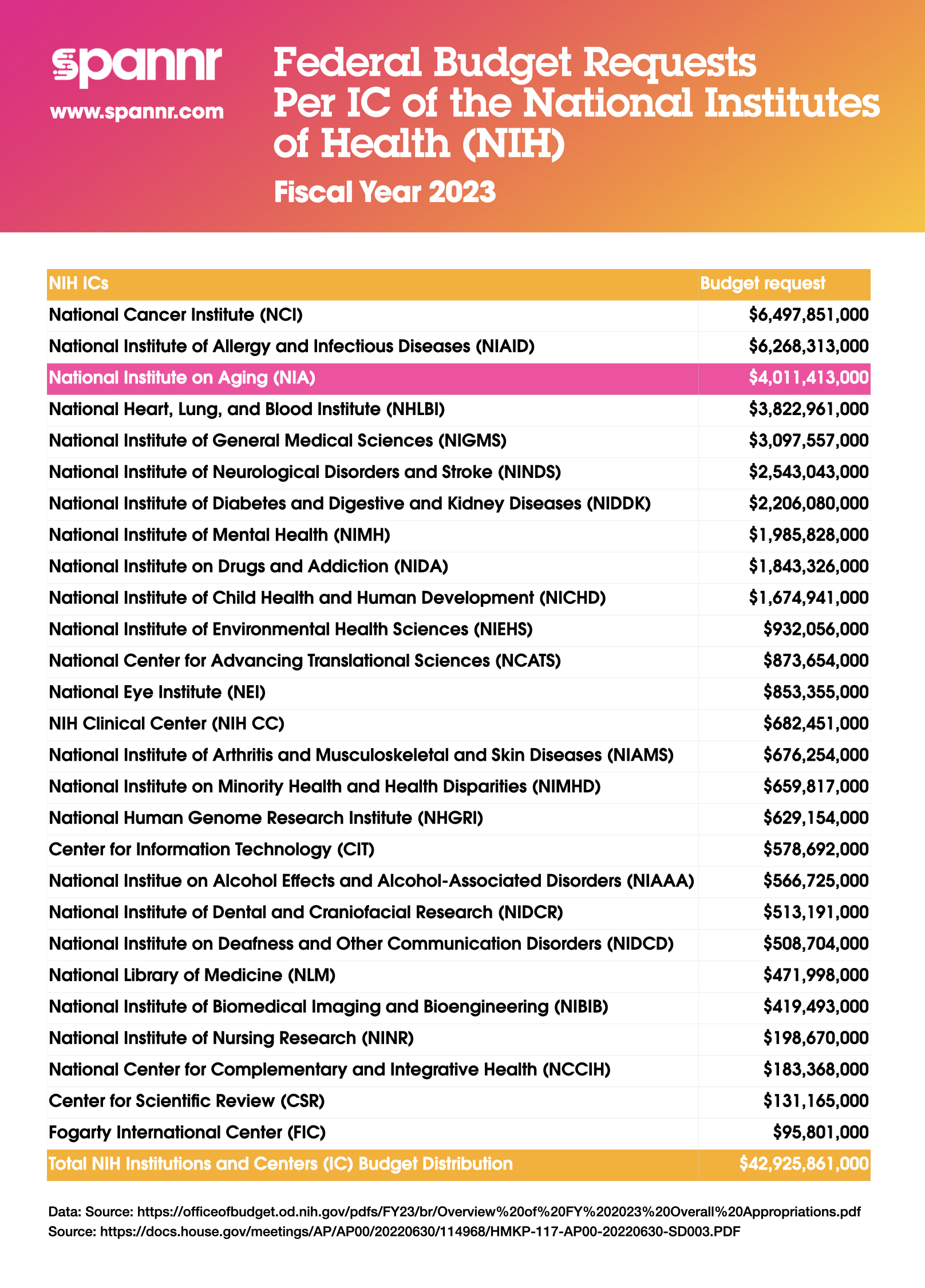 Before we continue, it is important to point out the fact that the figures above only represent the President’s 2023 Budget Request. Therefore, it is only a projection of what each NIH division will receive in funding in 2023.

The enacted (final) appropriations will vary thanks to the Federal Budget and Appropriations process, which is essentially Congress’ response to the President’s proposal. For example, in 2021, the initial budget request for the NIA was $3.2 billion. The total enacted, on the other hand, came out to approximately $3.8 billion. To view the recent history of total NIH appropriations relative to budget requests, explore the table presented here on page 46.

Nevertheless, the Presidential Budget Request still gives us a good indication (and estimate) of how much capital is provided to the NIH, and more specifically to the NIA.

Key highlights from the chart above:

Now, one would think that ~$4.01 billion is a reasonable amount of funding for the NIA to fuel aging research.

But, to find out how much of that money is actually budgeted for foundational aging/geroscience research, we must dig a little deeper…

Breaking Down The NIA Budget Request For 2023

Similar to the NIH having to divvy up its annual budget across its various divisions and counterparts, the NIA is also responsible for deciding where exactly to distribute its granted tax dollars.

For example, in 2021 the NIA used its budget to help support:

Inside the same overview, the NIA also details their budget mechanism, indicating they plan to spend most of the money on RPGs, followed by Research Centers and Intramural Research (research done by scientists employed by the Federal government). 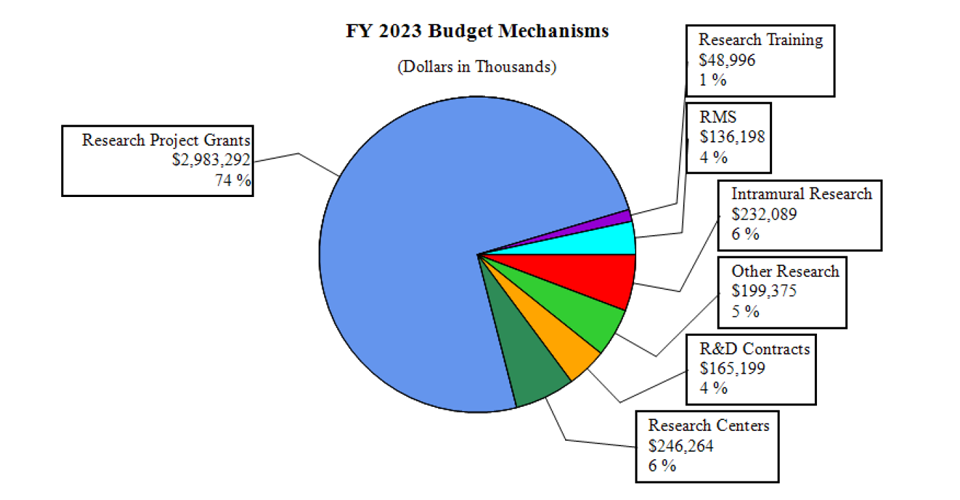 But, as we briefly mentioned before, the NIA is not solely focused on aging research.

Therefore, in order to see how much funding is actually geared towards aging research (classified as Aging Biology), we must look at the NIA’s Budget Authority by Activity table.

The following table essentially depicts how much of the budget is allocated to each division of the NIA. It’s also worth noting that these figures are classified as “extramural” research. This is research performed both domestically and internationally by “investigators” who have been awarded grants through the NIH grant program.

The National Institute of Alzheimer’s (NIA)? 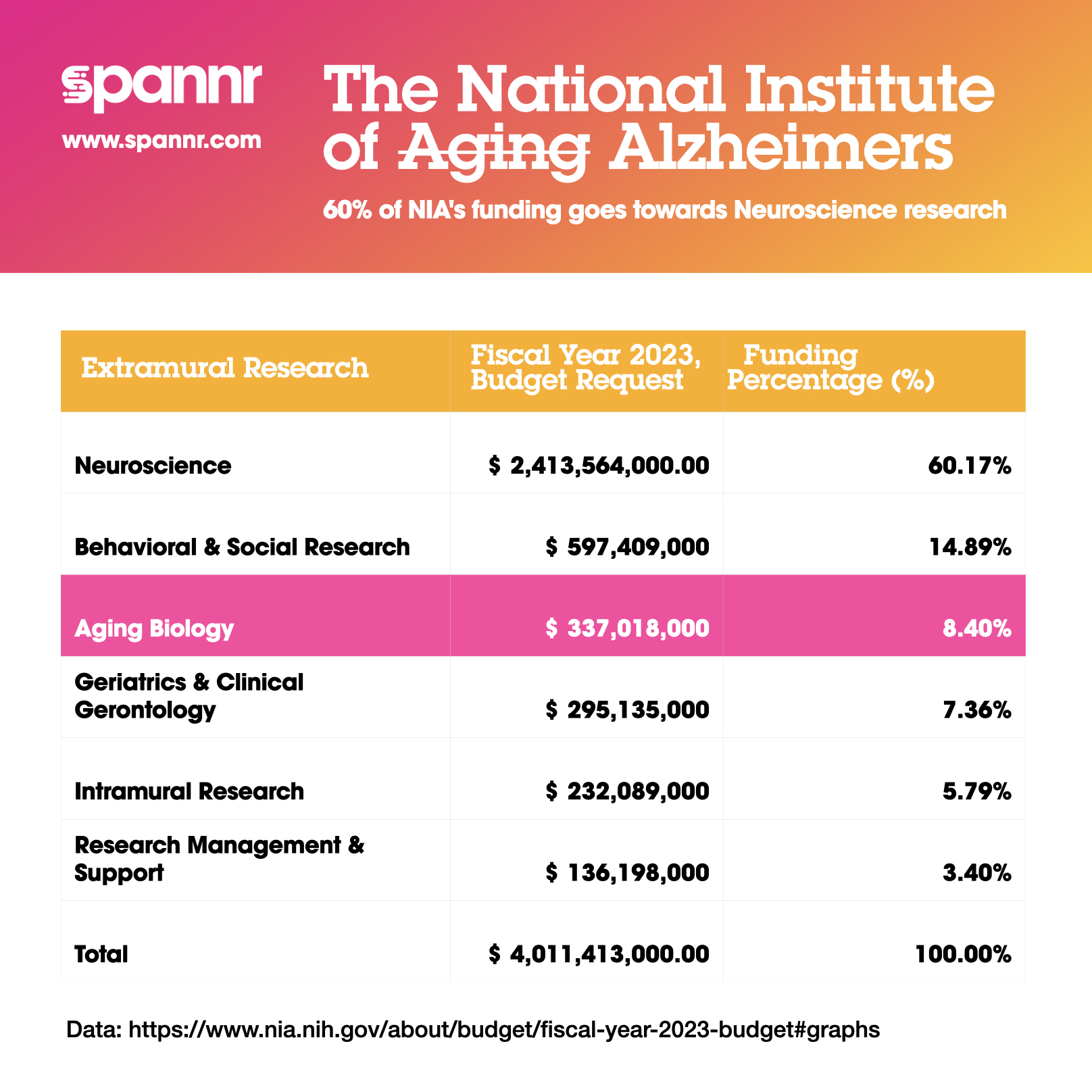 There’s a running joke in the industry that the NIA truly stands for the National Institute on Alzheimer’s… not Aging. The table above perfectly explains why that’s the case.

Jokes aside, the fact that Alzheimer’s research (classified as Neuroscience) hauls in the majority (approximately $2.4 billion, or ~60%) of the NIA’s total annual budget is a serious issue that needs to be addressed.

The Elephant In The Room

If properly funded, the NIA’s Division of Aging Biology has the chance to become a massive catalyst for innovative longevity therapeutics that could lead to unparalleled economic growth and productivity.

The problem is that aging research via the NIA/NIH is not properly funded, not even close.

As a result, the US continues to spend billions of tax-payer dollars on specific diseases such as cancer, heart disease, and Alzheimer’s, rather than funding the science that aims to understand (and solve) the root of all age-related illnesses.

For greater context on just how much aging research is misunderstood in 2023’s budget request, we invite you to check out (and share) the image below. 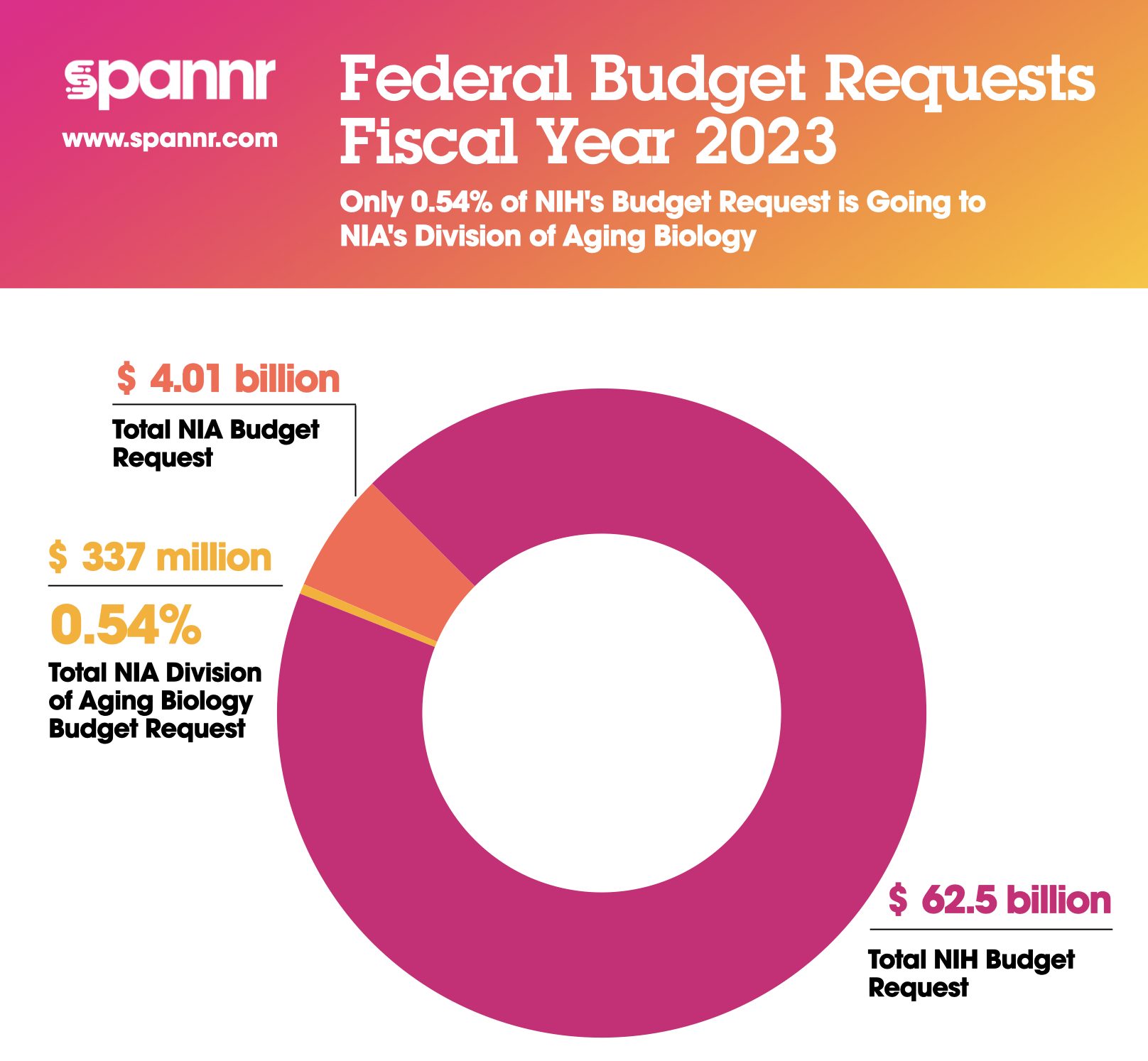 All things considered, it’s no wonder industry leaders are relying on investments from billionaires, non-profit foundations, and both the private and public markets.

The call for more sufficient funding, to add, isn’t just stemming from longevity enthusiasts like us and the scientific community either…

In recent years, US political scientists, economists, and educators have been puzzled by the staggering rate at which life expectancy in America continues to drop in comparison to most developed countries.

Staggering: Life expectancy — US vs. average of all other @OECD developed countries.

Both dipped in 2020 (Covid), but the gap between them has been widening over time & US dropped off precipitously in 2019.

one of the most disturbing demographic data trends you’ve ever seen.

This data – which brings up several alarming questions that remain largely unanswered – gives us another clear indication that funding for longevity and aging initiatives needs to be taken more seriously, especially by the US government.

Putting It All Together

However one wants to slice it, the bottom line is that the field of longevity is not getting the government support it needs.

Tie that to the fact that the NIA is one of the few government-funded agencies in the world dedicated to supporting longevity research to begin with, and the notion of negligent funding may soon fall into bigger humanitarian, social, and economic issues that extend beyond US jurisdictions.

The global effort by the longevity scientific community to receive more funding – to further conduct groundbreaking research that has the potential to extend the number of healthy, disease-free years of every human on this planet – is something that we can all certainly stand behind on.

And unlike most policy and/or Federal budget initiatives – longevity is something that can certainly be supported by both sides of the table. In other words, there’s no reason this shouldn’t be a bipartisan effort.

Now, given the funding concerns explained in this report, one may quickly come to the conclusion that the Appropriations Committee simply needs to wake up, or perhaps learn more about the breakthrough potential of aging biology research.

But that’s not the case.

According to a draft of the Fiscal Year 2023 Labor, Health and Human Services, Education, and Related Agencies Funding Bill, house appropriators are well aware of what’s unfolding and are even calling on the NIH to launch a larger initiative in geroscience:

“The Committee commends NIA for its support of geroscience, which seeks to understand the genetic, molecular, and cellular mechanisms that make aging a major risk factor and driver of numerous chronic conditions and diseases, including Alzheimer’s disease, cancer, cardiovascular diseases, and many others. A growing body of research suggests it is possible to develop treatments that would address many late-life diseases, as opposed to solely tackling each disease individually, as under the current prevailing model. Significant advances in recent years highlight the need to develop a comprehensive strategy for addressing research gaps and opportunities. Therefore, the Committee urges NIA to convene a meeting of experts across NIH, other relevant Federal agencies, academic researchers, and the private sector to identify gaps and opportunities for this research field.” ​​(Emphasis added.)

“Such an initiative might include increased funding for basic, translational, and clinical research, research infrastructure, workforce development, the development of platform technologies for geroscience, and collaboration with the FDA, industry, and academia on the discovery and validation of biomarkers.” (Emphasis added.)

So, is this a step in the right direction? Absolutely.

But, will these comments actually translate into a better funding process? We’re not so sure.

What we do know is that age-related diseases such as Alzheimer’s, diabetes, cancer, and heart disease are the leading causes of increased government spending due to their impact not only on the healthcare system, but also by negatively impacting economic growth.

By attacking these problems at their root cause rather than their symptoms, the government could save trillions of dollars in future spending.

Simply put, government entities and the longevity community will need to come together to revamp the funding process around aging-related diseases.

We here at spannr hope to contribute to that process by providing research, data, and thought-provoking ideas very soon. Stay tuned.